Recently I bought a new computer with a Samsung Spinpoint F1 as primary hard drive. Every time when I boot up the computer or the system is heavily loading data the hard drive brings the whole computer case into vibrations which is making quite annoying sounds. So I decided to buy a HDD silencer to decouple the hard drive from the computer’s case. At the time of my research several HDD silencer systems where available. The main difference between the various products although was the fact that there are complete decoupling mechanisms and partially decoupling mechanisms for your hard drive.

Partially decoupling mechanisms generally tend to replace the screws which are holding your hard drive with screws that have a rubber buffer zone which reduces the amount of vibrations transferred to the case. This means usually you must place your hard drive into the 5 1/4 inch slot.

So I decided to buy the HDD vibe fixer from Sharkoon. The pictures below present the complete decoupling mechanism sharkoon is using in HDD vibe fixer. The quote from sharkoon best describes their product: 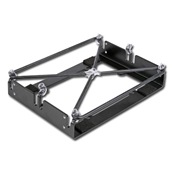 I really must say that now my system with HDD vibe fixer installed is amazingly quiet. No more vibrations even when heavily loading data on the hard drive. This was worth the 25 dollars I paid for this product!